I seem to have lost my knitting mojo over the past few weeks.  I always find a new job is incredibly tiring for no apparent reason – maybe it’s the nervous energy I burn off when trying to look normal.  As a result, the green waistcoat I have been knitting has hardly progressed at all as I couldn’t summon up the enthusiasm for knitting more than a few rows a night.  As I have settled in and worried less at looking strange, my interest is slowly coming back and I hope UFO guilt won’t be haunting me for too much longer.

I have,however, come up with a brilliant stash-busting wheeze which seems to be working out for me.  I have set myself the goal of making at least one granny square a day while travelling *and*, this is the important bit, sewing it into place in the evenings.  I have already disposed of a considerable quantity of wool that has been hanging around for ages. Some days I have done three or four squares but most days only one. Each 4 round square is made with DK and a 4.5mm hook and it’s surprising how quickly the blanket is growing and my stash is shrinking with only 20 minutes work a day.  This is what I have achieved since the 1st September:

Currently it measures 33 inches across at the widest point and I am planning to make it large enough to cover a double bed.  I am also pleased with the colour scheme.  Last time I made a granny square blanket I didn’t really plan ahead in the respect.

Here’s to hoping my next post will be the little waistcoat I thought it would be so quick to make.

This post is a bit of a moan on my part.  I do apologise in advance.

As winter approaches and I finished my scarf, I had the urge to try making some kind of headgear.  As I’ve said before, I cannot crochet hats. I don’t know why.  There is some disconnect between my brain and my hands which means the things I produce just don’t fit and/or look hideous.  Some eternally optimistic part of me, however, seems to think that if I practise enough I can overcome this problem so I have spent the last couple of weeks hunting for a pattern to tempt me into trying again.

My first attempt was the Any Gauge Beret pattern in the most recent issue of Inside Crochet.  The final result was an abomination which I frogged before anyone could see it.  I am sure the pattern is fine and the problem lies with me but, honestly, it was a floppy, misshapen mess and a waste of good wool.

Then I spent sometime rummaging around on Ravelry and found the Durango Hat pattern.  It was free, masses of people had managed to make it work and it looked quite sweet so I thought I would have a crack at that instead.

I didn’t actually manage to stick to the pattern as published.  I had to add a considerable number of rounds after row 7 to get a hat rather than a yarmulke.  I was using the prescribed yarn weight and hook size but there was no way an 11 round version of this was going to cover my head.  God only knows what it is I did to make this necessary. 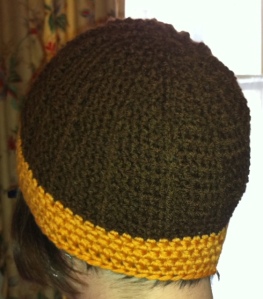 I do like the raised effect on the main body of the hat.

The other modification I had to make was to use a double stand of wool for the brim.  One strand worked but the whole effect was a bit too holey-looking for my tastes.

Not sure why I am posting a "front view" too as you can slap it on your head at any angle. It feels necessary though.

The upshot of all this is that I have a hat, it fits and it (sort of) matches my scarf.  I am not totally enamoured of it but I am chalking it up as a win nonetheless. Now the question remains, will I actually bring myself to wear it in public…

<Walks off grumbling to herself and kicking things.>

The tea cosy is complete and it has pleased me to such an extent that I had to throw together a quick post about it. I thought originally that I was too cool for pompoms and planned to leave it plain.  When I was done, however, it just didn’t look finished so I posted a quick snap to Twitter to see what other people thought. 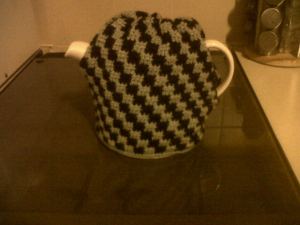 Slightly crappy photo but I wasn't thinking about blog posts at the time.

Somewhat surprisingly, the opinion of my followers seemed to be that a pompom was an absolute necessity – who knew that fluffy balls of wool were so popular?  In my heart of hearts I knew they were right and so…

You are obviously never too cool for a good pompom.

Week 17 and I am done!  Callooh! Callay!  I haven’t posted for a few weeks for a variety of reason.  The first weekend I was gallivanting around the Edinburgh Festival having a lovely time.  While I was there I fell over and landed with all my weight on my left hand.  (I was stone-cold sober, I hasten to add.) For about a week afterwards I couldn’t really stitch for more than a few minutes at a time.  Once that had improved, I kept thinking I was almost finished and putting off blogging but, as always, the last little bits took far longer than I anticipated and, to paraphrase Number 10, time got away from me.

So what were the final tasks?  I glued the Police Public Call Box letters into place and then, because they seemed a little less than sturdy, I sewed them down for good measure.  Next I added a two round double crochet border in black to tidy up the edges. Then I “embroidered” the door plaque.  I am not happy with how this turned out *at all*.

The soluble Aida gave the impression that the stitches were far more uniform than they actually were.  Once I dissolved the Aida and lost the grid structure, the shape of the crochet stitches underneath pulled the letters out of shape.  Some of the letters lost their shape and the lines of text revealed themselves as really quite wonky.  I’ve decided to live with it for the time being but, if it really bugs me, I may get some ironing paper and material to cover it in the future. Lastly, I sewed in the ends. 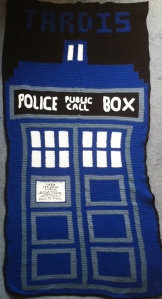 Approximately 50,500 stitches have gone into this blanket over 200 hours or 15.4 days.  It’s the most ambitious project I have made to date so I am trying to cut myself some slack over the deficiencies.  I have decided not to crochet the St John’s Ambulance badge despite declaring that I would all along.  I think it may make it look a little too busy.  So all that remains for Monkey and me to do now is to snooze under it.  Now, where’s that tea cosy pattern I had my eye on?

Optimism: belief that everything will work out well. Irrational, Bordering on insanity. July 31, 2011

This post covers week 13 and 14 which have been a mixed bag of success and downright disaster.  Last week I finished the main body of the blanket.  By the time I had added the word TARDIS it was finally long enough so I decided not to bother with the words ‘type 40’ as well.

This would have been cause for much celebration on my part but, before I could enjoy myself, I got a stinking cold and spent three days wandering about feeling sorry for myself and not doing very much.  (This is why I didn’t post last week. I was mostly sleeping and moaning.)  Once I was taking notice again, I leapt in and made a start on cross-stitching POLICE PUBLIC CALL BOX onto the sign board.  As I said before, my plan was to use soluble Aida and charts.  I had drawn the charts a few weeks ago and they looked spiffing so I got cracking.

After the first row on the P, I stopped and looked and thought ‘Hmm’ but convinced myself that I needed to finish the whole letter before I judged.  This was my first mistake.  I finished the P and still wasn’t convinced but tried to tell myself I was being fussy and started onto the O.  This was my second mistake.  Three rows into the O, I stopped and admitted that it looked dreadful.  Despite the Aida, the stitches were really uneven which I think was down to the irregular nature of crochet fabric.  I wasn’t even getting a clean edge on the letters.  If I had stopped at the first row like my instincts suggested, I may have been able to unpick it.  By the time I done the P and part of the O unpicking wasn’t an option anymore without running the risk of damaging the crochet underneath. The stitches were too small to get any purchase on without pulling hard.  Chiz!

Having spent a couple of days thinking that I had ruined the whole project and sulking, I was suddenly struck with the brilliant idea of appliqueing crocheted letters on instead.  This means the letters looks even and they hide the failed stitching underneath.  They also have the advantage of being really quick to make.  An all round win, I think you will have to agree.

Covering a multitude of sins

So I am back on track again – hurrah!  I still plan to stitch the door panel but only in back stitch which I hope/think won’t cause the same problems as cross-stitching.  The end is in sight.  I estimate another 3 weeks will see this finished so I am already pondering what I will do next.

This week’s quote is from everyone’s favourite tin dog.  It’s not a TARDIS quote but struck me as so apt that it was begging to be used.

Week 12 and the row count is 308.  The actual TARDIS is complete but the blanket still isn’t long enough for comfortable snoozing. I had seen this coming and plotted a third chart a couple of weeks ago.  The new chart adds the immortal words Type 40 TARDIS  to the top of the blanket and really should signal the end of the crocheting on this project.  Phew! Click on the link if you would like a pdf of this part.

I have carried on practising my cross stitch this week and have completed almost one whole word. As I have only been stitching on the bus, I am not entirely ashamed of my progress.  The plan is to eventually stitch the the whole of the door panel unless I run mad first. I have a feeling that this could be haunting me for years as my cross stitch concentration is never good.  It is making me happier about stitching on the blanket though so it has already done some good. 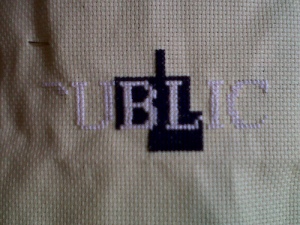 I am going to need a lot of blue thread.

This week’s quote’s an easy one but I did have to watch 15 minutes of the requisite episode so I could take it down accurately.  What a slog for me!